Who Makes Jeeps, And Who Owns Jeeps? 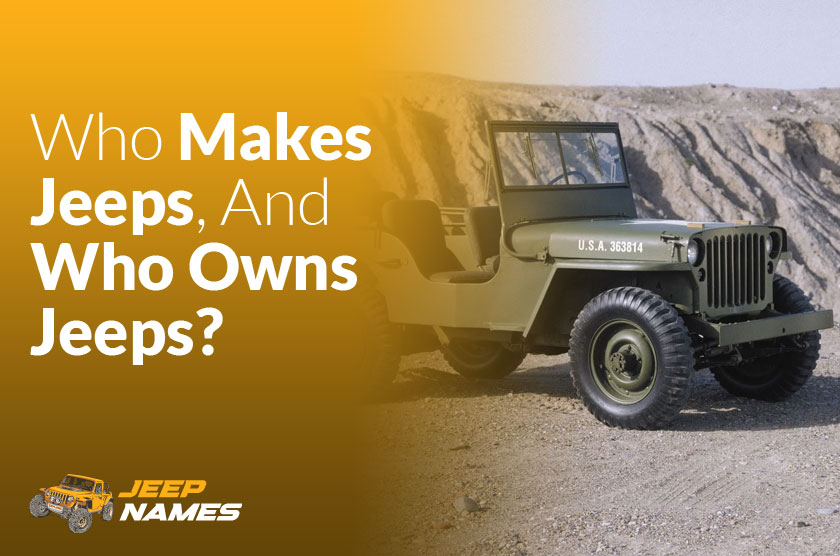 Jeep is a very popular company that works worldwide. But have you ever wondered who makes them or who the owner of this amazing company is? Almost every jeep lover wanted to know about the history of the jeeps. If yes, this article is for you; we will discuss everything about the Jeep.

Jeep is an automobile company based in America. The company jeep produces sport and luxury vehicles. It is a very famous brand that was established 77 years ago. The company works worldwide and produces a wide range of luxury and sports vehicles.

The company jeep has a very long history. It is a very old company, which is why it is popular and produces impressive vehicles. It is one of the oldest luxury and sports vehicle companies. The initial jeeps were produced in America only.

Over time, the company starts growing. Firstly, the owners started producing jeeps in America. Now the jeep company has planted almost in six countries. There are 10 plants all over the world. The United States, China, India, Mexico, Brazil, and Italy have manufacturing plants for the jeep company.

The Jeep is selling its vehicles in over 140 countries. The base of the jeeps is in the United States of America. However, they are growing day by day. It is a very popular vehicle-creating company worldwide.

Who Owns the Jeep?

Here comes the most important question, who owns the Jeep? People often ask about the ownership of the jeep company. The ownership history of the Jeep is vast. Ownership history is based on very big names. All these things happened to the company; the Jeep was very helpful.

The Jeep is owned by stellantis. Stellantis is a very popular automobile company that works globally. The Stellantis Company is formed by Fiat Chrysler Automobiles (FCA) and the PSA Group merger. This company owns many other popular car-producing companies, including Chrysler, Fiat, Alfa Romeo, Ram, Maserati, and Dodge.

PSA Group and Fiat Chrysler Automobiles (FCA) were not merged. The companies planned to merge in 2019, but the merger was delayed due to the coronavirus pandemic. In January 2021, the two big companies merged and formed FCA and PSA group merger. After merging, they become the fourth biggest car-making company by volume and the third biggest company by revenue.

Before merging, the Jeep was owned by FCA only. The FCA was the owner of the company for a long time. As we have mentioned, the ownership history of the jeep company is changing a lot. Let’s discuss the history of the Jeep from the start.

Who was the owner of the Jeep before FCA?

Willys-Overland produced the first vehicle of the Jeep. He was the first man who created the Jeep and was the company’s first owner. The world war and the jeep production were related to each other. It was first used in the army as a military vehicle in the 1940s.

Willys overland was able to trademark the Jeep in 1943 after three years of production. After some years, Willy overland sells for 60.8 million dollars to Henry J. Kaiser. The company’s owner changed the company’s name to Willys Motors Inc. in 1945, and after some years, in 1953, the name changed to Kaiser Jeep Corporation.

American motor corporation (AMC) purchased the company in 1970 for 75 million dollars. It remains the America Motor Corporation for 17 long years. From the first owner to the AMC, the company was grown very well.

Who was Chrysler, and what was his role in the Jeep?

Chrysler purchased the company from AMC after some years and became the owner of the Jeep Company. In 1987 AMC sold the Jeep to Chrysler for 1.5 billion dollars. The company’s new owner works very hard to make it more popular.

The Chrysler produced the Jeep for 11 years, and he was the only owner for 12 long years. In 1998 Chrysler found the co-owner of the company to merge with them. Chrysler merged with Daimler-Benz and became a new company called DaimlerChrysler AG merged company.

It was difficult for Cerberus to manage everything in the company, so they owned the company for 2 years before the bankruptcy.

When did fiat buy Chrysler?

Fiat bought Chrysler in 2014. The fiat buys the company in portions. First, they brought the 20% stakes in Chrysler in 2009. According to the U.S. government, they can buy more stakes if they fulfill some conditions. Fiat kept on working hard, and after some time in 2014, they bought 100% stakes in the jeep company and became the owner. After that, the company becomes Fiat Chrysler automobiles FCA.

Now the Jeep is owned by Stellantis. They became the merger with FCA in 2021, and they still own the company. Both Chrysler and Jeep work under the Stellantis.

Sponsorship of Jeep and apparel

The Jeep is an apparel brand with other outdoor lifestyle companies sold under license. There are between 600 and 15 00 outlets based in Chinese. The company jeep also has a sponsorship with the Italian football club in 2012. In 2014 they also worked with the Greek football club.

In this article, we have discussed a very popular vehicle-producing company. We have mentioned who makes jeeps and also who owns them. The ownership history of the Jeep is too long and interesting. Each company owner has worked hard to make it the biggest luxury and sports vehicle-making company. I hope you like this article.

Jeepnames.net is a participant in the Amazon Services LLC Associates Program, an affiliate advertising program designed to provide a means for sites to earn advertising fees by advertising and linking to Amazon.com