What Does Jeep Stand For: How Does Jeep Get Its Name 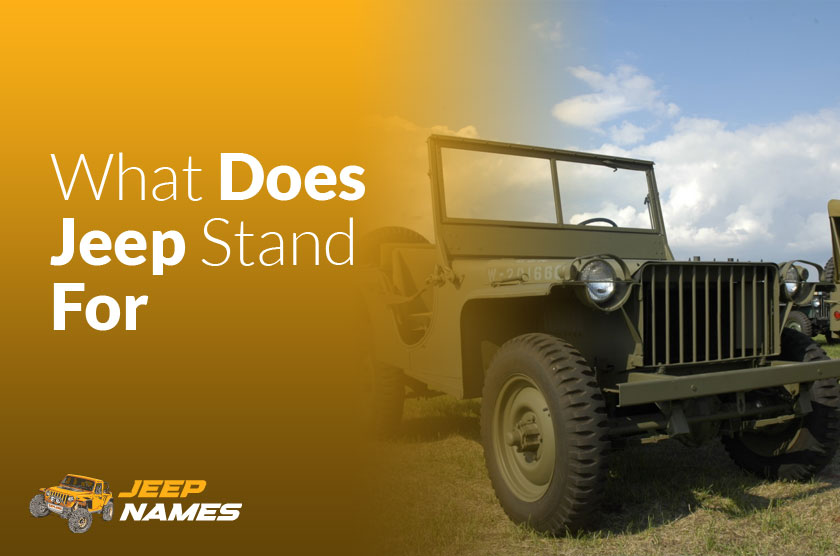 Jeep has become world famous, but its name has been a mystery for years. Do you also think that where does the name come from and what’s the logic behind it? So finally, the Jeep has revealed the mystery.

Hence, we will discuss the Jeep and the mystery of its name. The name comes from ford’s general purpose, military nickname, popeye, and Eugene, the jeep cartoon character.

What Is A Jeep?

Jeep was born out of American Army’s need for a vehicle to replace both the horse and motorcycle so that it could be used for general transportation purposes. Most theories state that the name comes from G.P., while others believe it comes from Eugen the Jeep.

It is said that the Jeep is one of the most indicative carmakers in the world. Whether in London, Australia, or Germany, you will not find a person who does not know about Jeep.

Origin Of The Word

If you want to know how Jeep gets its name, you will have to understand how the word originated and why. So let’s discuss it first:

It is also said that the word jeep comes from G.P., a military designation for government purposes. The Willy’s Overland President claims that he mumbled the G.P initials to Jeep while working with the military, and then they started calling his vehicle jeep.

According to history, the military used the word jeepduringWorld War 1. They used the term to refer to:

· Popeye and Eugene the Jeep

Now the question is when and how this name came to the public. When Willys Overland drove the vehicle through the steps of the United States Capitol, a journalist asked the test driver what this vehicle was asked, and he answered it was a ‘jeep.’ Irving Red Hausman, Willy-Overland was not only the test driver of the Jeep but also the original manufacturer of it.

When that journalist Katherine Hillyer interviewed Red driving man, she published an article in the news and attached a picture of that vehicle driven through the U.S.

What Does Jeep Stand For?

Jeep is a company that is unique in the automobile industry. The company has a product range mainly consisting of SUVs and off-road vehicles. There have also been pickup trucks by this company in the past, and they will make a comeback soon in the market.

The jeep brand is considered the daddy of SUVs in the market, so they started launching these vehicles for the military. The company had to make high-standard vehicles because the military personnel drove the cars at high speed without fear of damaging the cars.

Besides this, Jeep has also worked on Luxury SUVs and made its name in the market. People think these luxury jeeps are because of the Wagoneer that this company created in 1962. Many similar cars have been seen since that day.

In 1969, American Motor Corporation AMC purchased Kaiser. They did so to facilitate the exit from the automobile industry. At the same time, the Jeep brand reached greater heights during the AMC era.

After some years, nothing, not even a Paris partnership, could save AMC, so Chrysler decided to buy it in 1987 and closed it. But do you know what? Chrysler wanted the Jeep’s name, image, car, and intellectual property of the Jeep.

Unfortunately, the vehicle manufacturing process badly affected industries during the economic decline. So, Chrysler had to cut off Daimler and declare it a bankruptcy case. He then found a new partner from another company and started working together. The new team is called Fiat-Chrysler Automobile. They also introduced a new compact vehicle called the Renegade.

Read Also: Who Makes Jeeps, And Who Owns Jeeps?

You might have heard about upper and lower-case jeeps, but you may be confused about the difference between the two. Willys Overland applied for the Jeep trademark in 1943, but it was not approved until 1950 due to some conflict over the name’s origins. There was also the confusion that which vehicle the name should be applied to first.

First, it was Jeep, and then it became Jeep, but you can still see both in the dictionary. The difference is only about the trademark, lower, and upper case. The lower case jeep has been used for a long time. The upper case trademark is the final one and is commonly used for anything from ’45 onwards.

So if you are confused about Jeep and its name and where the name came from? Mostly, the name comes from ford general purpose, military nicknames, Popeyes, and Eugene the jeep cartoon characters. Jeep is a famous automobile brand with a wide range of auto products. Willy Overland introduced the trademark in 1943, and the Jeep was first seen in U.S. Capitol. This article would prove informative for you.

Jeepnames.net is a participant in the Amazon Services LLC Associates Program, an affiliate advertising program designed to provide a means for sites to earn advertising fees by advertising and linking to Amazon.com